Lava Buckley is a filmmaker based in Albuquerque, New Mexico. She was recently named Outstanding Female Content Creator in this year's 72 Hour Shootout! Lava is an actress turned filmmaker, comes from an incredibly interesting Thai family history, and has an astounding amount of special skills and hobbies! Keep reading to find out more about what makes Lava an Amazing Asian in the Arts!

For pay, I’m currently a Production Office Coordinator on a feature. For passion, I’m gearing up to film a short based on a true story of a Chinese Immigrant Woman in the 1800’s.

I made a short video (it’s kind of a documentary) about my experience as a Theravada Forest Nun called “The 3 Day Nun”; I started making stop motion series of true stories. My first entry to the 72 Hour Shootout, “Call Me Mary,” was a great experience of me realizing I wanted to write and direct. Plus it’s based on a true story about the first known woman of color photographer, Chinese immigrant Mary Tape, during the 1800’s.

Nobody’s path is the same. The path you walk is yours, so own it. Grow from the lessons you learn on the way, and be ok with rejection and mistakes. It’s part of the process and that’s ok. Doesn’t mean it will be painless. However, rejection and mistakes can be teachers to help you find your path.

About 19 years ago, I had my first audition for a McDonalds commercial and I booked it! I was an actress/model for 5 years on my film journey. Then decided I wanted to move to a small film industry outside of LA, so I moved to Albuquerque, New Mexico. It proved to be a great decision. I was an actress when I first moved to NM, but then transitioned behind the scenes. I found I wanted to be a storyteller and not necessarily an actress. Since I changed my path, I have been able to work on many different scales of productions in various positions.

I had a three year medical hiatus due to being mauled by a neighbors pit bull that left me unable to walk. When I felt I could go back to work (I overcame an incurable diagnosis! And able to walk again), I was so nervous that I would not get hired with such a long hiatus and if I did I would not remember how to work on a production job. My mother and I went to Thailand to visit family and participated in ceremonies and merit offerings. When we got back from Thailand, I landed an incredible job. It was better than the job I had before my incident and have been working non-stop since. I truly feel that my spiritual work in my Thai Culture blessed me!

Having courage to gather crew and cast to make my stories. I can help others, but have found I haven’t been able to do so for myself. Also, I had to be very honest with myself with what I really want and found I didn’t give myself permission to be a writer or director. It’s still a struggle to feel worth enough to be a writer and make my own stories. My perception of self feels programmed that I am “less than” being a half Asian woman and no one cares to hear what I have to say.

I stayed in a leper colony by myself in Thailand.

I have flown an airplane, skydived, bungee jumped, SCUBA, swam with manatees, was a watchmaker, worked on cars for 20 years with my dad

I have a lot of hobbies, some are: silversmithing, sculpting chickens in pants, playing the ukulele and banjolele

Do you have any organizations or non- profits you work with you’d like to highlight?

For about 6 months, I was contracted at a No Kill Animal Shelter as a marketing assistant, where I used to make videos and take photos of the shelter pets that had a hard time getting adopted.

My mom! She’s an incredible human. She has overcome so much but never stopped. Mom came to the US barely speaking English, left her friends and family in Thailand. She had a lot of hardships, challenges, faced a lot of racism, but stayed determined. Most people could not accomplish half of what my mother has. I wrote a script about my mom that I am planning to edit soon. I am hoping to create a film to let my mom know I saw and appreciate how much she did for us. I feel so fortunate to have a kick ass Thai immigrant mom and proud to be her daughter. My mom is such an incredible inspiration to me.

I won a mentorship with Daniel Sakaya at Crossings TV last year with the 72 Hour Shootout. He was GREAT!

When I was in 4th grade, I saw Aubrey Hepburn on TV helping children. My family and I had lived in a shelter no long before this, so I thought, “if I go into the film industry then I could help other poor kids.” Not only was I inspired to go into film, but I used to draw, paint, crochet, sew, dance, ceramics, study photography, etc. My mother would have my sister and I in various art classes when we were children.

I enjoy doing a variety of creative expressions: silversmithing, photography, sculpting, drawing, painting, and stop motion animation. I have studied Traditional Thai, Tahitian, Modern, and Ballet dancing. My latest obsession is playing my ukulele and my bankolele.

Learning to maintain my authentic self.

Ohio University for Business Communication. However, I learned film making on the job and on YouTube! My filmmaking skills are self taught.

Learning to walk again then realizing I need to embrace my dreams. Overcoming something as challenging as overcoming an incurable diagnosis (which was beyond challenging) reshaped my mentality and life.

I want to create a short film called “Charlie” by the end of 2020. I have a documentary about rehabilitating my leg and I need to edit it as well. In 2020, I want to write and direct a feature. Then keep making films!

I love giving a voice to incredible Asian Women’s stories that are inspiring.

Four years ago I was mauled by a pit bull. He caused severe damage to my right ankle and I was told I would never walk again. I spent 3 years overcoming an incurable diagnosis During this time I wasn’t able to work in film, so I felt super rusty and out of touch with it. It was not a failure or mistake, but a huge hurdle to get back into the industry. I also realized that I spent too much time not admitting that I wanted to write and direct, so I bounced around different departments. I feel like I lost a lot of time with my injury, not focusing and not admitting what I wanted to do.

What made you take the leap from acting to writing or directing, and how did it change your way of thinking?

After I booked a feature as a day player actress, I realized I wanted to be a storyteller and not an actor. Acting was ok, but I have too much to share and tell.

Telling stories that will plant a seed for inspiration and create a shift.

Being mauled by the pit bull, then leaving my ex even though I was still unable to walk. I decided to learn from my hardship and focused on truly healing myself, which meant facing things about myself I did not like and change.

Think we covered quite a bit! It’s such an honor to be interviewed. Kob koon mak ka/Thank you very much!

To find out more about Lava, please visit her at: 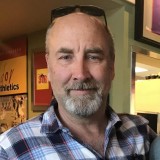 Lava is an amazing human, kind, artistic and full of joy to be with.